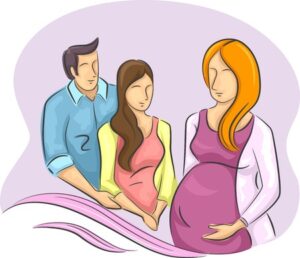 Surrogacy is a process where a surrogate woman rents her womb to the intended mother who is unable to conceive through normal means. Surrogate mother agrees to hand over the baby to the intended couple.

The process of surrogacy is of two types:

In Gestational surrogacy the sperm and egg of the intended parents is used and impregnated into the gestational carrier (surrogate) who carries the embryo for the full term. In this type of surrogacy the surrogate is only used to rent her woman having no genetic relationship with the child. The Indian Council of Medical Research (ICMR) allows only Gestational Surrogacy.

How to choose your surrogate:

Choosing a surrogate can be a tough process, some prefer to choose one from the family. This might end up reducing the cost of the process but can lead to disputes in the family at later stages of life, keeping in mind the bond that is formed in between the mother and the child. Hence the surrogate mothers can also be finalized by taking the help of the agencies that are experienced and caring towards the process. The agency should be chosen very wisely.

Qualifications of a surrogate:

Signing a contract with the surrogate mother:

This is the most important aspect of this procedure. There has to be a contract signed between the surrogate mother and the intended parents to avoid any dispute in the future. Each and every surrogacy agreement has different clauses based on your relationship with the intended parents. The contract is signed before the medical process begins clearly outlining the legal aspects of surrogacy including:

Once all the necessary work is done both parties agree to the terms of the contract, the papers are signed between the intended parents and the surrogate and the contract becomes legally binding. With the right medical and legal proceedings the process of surrogacy goes really smooth and successful.